Siena and the Palio are two things that cannot be separated. The Palio is the event to which Siena and its Contrade revolve around. The Sienese spend the whole year focusing on this festival that occurs, normally, only twice a year. Usually, the Palio takes place on the 2nd of July and on the 16th of August. I say, usually, as this year there was a third Palio on the 20th of October. This was supposedly to commemorate the 100th anniversary of the end of World War One however, some whispers have reached me (and by whispers I mean very loud Sienese shouting very loud opinions at me) that this Palio Staordinario was actually just an attempt of a political PR stunt running up to elections. If this is the case, it is quite the hefty PR stunt as to hold a Palio costs near a million euro and that’s not including the money each Contrada raises to pay their jockey to ride for them. Its also a huge deal as it is incredibly rare. The last time a Palio Staordinario occurred was in 2000 to celebrate the new Millennium and the last time it was held in the month of October, it was 1745. So as you can tell- it was a big deal.

There was some opposition to the extra Palio this year within the city however. A crucial thing to understand is that the Sienese are incredibly traditional, especially when it comes the the Palio. They take great pride in the whole competition, despite it being ridiculously corrupt, and aim to either win or beat their rival Contrada at whatever cost. This means they have to raise, in my opinion, an extortionate amount of money to pay the Jockey’s fee and also for bribing. (Like I said it is corrupt AF). You can see why some of the Contrade were not exactly gung-ho for this untraditional and expensive Palio Straordinario. It ended up being a case of 10 Contrade for and 7 against having it. Unfortunately for the 7 it was not exactly a tight vote. Some locals told me that a lot of contention between Contrade is centred around money as (like in the rest of the western, capitalist world) some Contrade are richer than others and so tend to dominate because they can afford to.

Despite the opposition, the vote for the Palio Straodinario passed and can I just say it was an incredible experience. To see the Sienese in their proudest form is something that can never be fully captured by words. Their sense of history and their sense of identity being rooted in that tradition is incomprehensible to an outsider yet somehow makes sense as you watch them parade around the city in the week leading up to the Palio. I almost envy them in the certainty of identity they are born with. They know they are a part of something from the beginning of their lives and they seem generally content with that. I knew there was reason you don’t meet a lot of Italians who are on their “gap year” (read as “gap yaar” ) trying to find themselves by going to Full Moon parties and calling home for money when they realise they forget to budget their money. Rightly or wrongly, the Sienese are brought up already with a purpose and an identity in mind.

Parade of the Istrice (Porcupine) Contrada

Parade of the Giraffa(Giraffe) Contrada

This particular Palio was also an incredibly violent experience. Perhaps, the excuse of a commemoration of the end of world war one was a farce, however the whole event truly echoed the brutality of the Great War in every sense of the world. Seriously, this Palio was like watching every needlessly violent movie ever made back to back (and that’s including all those scenes in the Avengers movies where they rip apart cities and other people’s property for no apparent reason). It’s honestly an achievement that so much can happen in the 90 secs of the race. To begin with, the bribing was next level this time. They didn’t even bother try hide it in anyway. As the jockey’s got ready in the line up and throughout the numerous false starts, you could see money switching hands and promises (or betrayals as a lot of losing Contrade members call it) being made.

Most surprisingly, one of the most dominant jockeys in recent memory must have taken a sufficient amount of bribes as during all the carnage of the crashes you could see him scarpering off his horse voluntarily and legging it in the opposite direction of the rather angry Contrada who had hired him. Since he was injured back in the 2015 Palio people have been saying he was on his way out and so this might have been his final corrupt dealing by taking as much money as he could get from other Contrade to throw the race. Apparently In Palio world you can retire on bribes if you are seen as a big enough threat. On one hand this is truly despicable and cowardly but on the other hand this seems to be the way of the jockeys in the Palio. It is among the many reasons as to why the Sienese hate them even though they depend on them for victory. It is also one of the many reasons the Palio and its inner working will forever confuse foreigners.

The most violent part of the whole Palio was the series of crashes that occurred in one of the most dangerous corners of the whole course. It essentially threw most of the riders off of their horses as they crashed into one another. One of the biggest critics of the whole Palio is this corner; it catches both Jockeys and horses out every year and sometimes to the point of severe injury and/or death. (Super cheery I know but if you watch the video linked below you will understand what I am talking about). The Palio Straordinario so far has one jockey in hospital with severe injuries and took the life of one horse as it broke its leg running the course. It also broke the arm of a medic who was crashed into as he tried to save one of the injured jockeys during the race. It’s safe to say that the chaotic and ferocious manner of this particular Palio made it very hard to watch. I didn’t realise until we had escaped the square but I had all been holding my breath for the duration of the race. The same way you do when you see a car accident up close; in shock.

Do not get me wrong, I do believe it is a beautiful thing to have such a sense of community and loyalty as they do here however this Palio has shown me just how violent the Palio can get. Yes,  this may have been an unusually violent Palio, but it does show just how violent this event can get. It does call into question how such an event can be held in a modern world? Just some food for thought really.

In the end the Tartuca (the Tortoise) Contrada’s horse won. I say their horse won as the Palio is one of the few horse races where the horse can still win without a rider on it as is the case of this race considering everyone fell off their horses. Only two riders finished the race on their horse. It was a right mess. The Tartuca have not won the Palio in something like 40 years and so as custom dictates they will be celebrating for a month. This means that the noise level of the city has just amped up to causing early loss of hearing and severe sleep deprivation, yay! It also means there will be a fair few Contrada parties on in the next month which is something to actually say yay to! 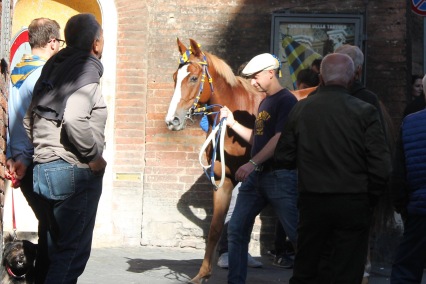 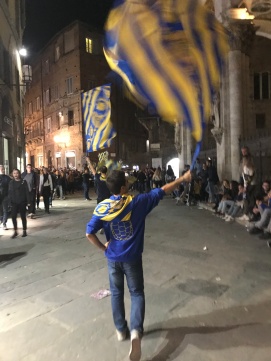 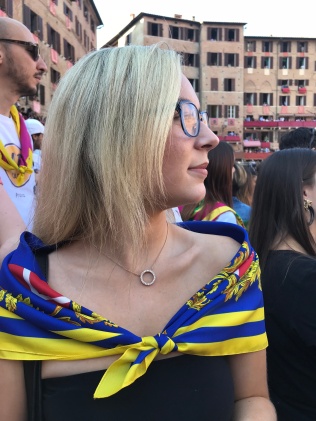 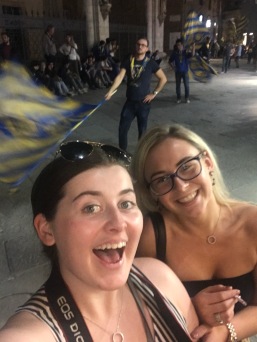 Laura and I crashing the Tartuca Parade festivities

See you next time with, hopefully, a cheerier subject!

link here to a video of the Palio Straordinario 2018

A Year in Siena

My year abroad was one of unforgettable experiences, beautiful places and exceptionally hilarious and knowledgeable people. It sounds cliche (obviously as someone who went on a year abroad, I am […]
A Year in Siena

22.11.19- 24.11.19 ‘Tis the season to be looking forward to all things seasonally appropriate, such as but not limited to: Christmas lights, Glüwein, christmas carols, Michael Bublé coming out of […]
Regensburg

7.7.19-9.7.19 Italy is full of incredible places and scenery to explore. From it’s sandy beaches on its coasts to its natural springs and thermal baths dotted around tuscany and beyond, […]
Lago di Como

6.7.19-7.7.19 So this was not my first trip up to the capital of Italy’s industrial region. I have been up to Milan once earlier this year around October and a […]
Milano

Hi Kids,  If you are looking for a perch in the Piazza del Campo head to Key Largo. It is first and foremost a bar but also does really good […]
Coffee Stop: Key Largo

Hi Kids,  Another day, another restaurant in Siena that will, in the words of that guy in mamma mia, tickle your tastebuds. Osteria del Gatto is one of the few tuscan […]
Food Stop: Osteria del Gatto

Hi Kids, If you are looking for an escape from Siena’s bustling and loud streets, then the place to go is the delightful bar called Blandis Cafe and Wine Bar […]
Coffee Stop: Blandis Cafe & Wine Bar