Much like many Italian cities, Bologna boasts an eclectic mix of architecture and traditions thanks to the rich and (LARGELY) turbulent history of the country. This mix gives the city a sort of chaotic vibe. It almost felt as if Bologna was that pre-teen girl who doesn’t really know who she is and sort of tries to throw together an appearance that she thinks people will accept.  (*cough* because let’s face it, it’s always a girl considering we are raised to fester in our own insecurities, cheers for that patriarchy.)

Anyways, I digress. What does differentiate Bologna from a lot of the other places I have visited in Tuscany is that there is a definite sense of locality to it. Now we were only there for a day, so by all means ignore me, but it was one of the few places I got the sense that they weren’t totally there to cater to the tourist. I just felt that it seemed much more industrial and a city that was being fully lived in. it wasn’t just a museum, (which in my not so humble opinion, a lot of Italy’s towns are), it was a home too. A sure sign of this was the fact that there wasn’t a lot of touristy things to do in Bologna. This also meant that it was an ideal place for a day trip.

We got the bus down from Siena which only took about two hours and then set our sights on just getting a feel for the place. My recommendation for trying to suss a place out is to start at its centre and work outwards. We headed in towards the main piazza which is home to a beautiful church and fountain. It also houses a fair few buskers who were mostly very talented. (Shout out to the legendary guy singing Sinatra’s My Way into a vintage microphone.)

She’s pretty, even when she’s storming

I suppose the main pull for most people to Bologna is the food, the Bolognese in particular. This stereotype is incredibly accurate as the food (and most importantly the Bolognese) in this confused city is delicious. If you are looking to do a bit of a food sampling lunch I would suggest you head towards the Quadriltero area. There are some great food stops here as well as the Mercato di Mezzo. If you are looking for a sit-down meal, at a reasonable price and you were freezing because Italy’s weather in the spring is cruelly unpredictable like we were, I would suggest the restaurant La Clavature (website here). The tagliatelle al Ragu was lovely and the staff were very friendly and incredibly understanding when a group of seven showed up at prime lunch time. Having worked as a waitress I understand the great patience it takes to be okay with that. Other food spots we tried included gelateria Gianni for ice cream which is really close to the two towers and RosaRose bistrot (website here) for aperitivo. RosaRose also boasts quite a brunch menu and an overall aesthetic that would make any millennial/generation ‘z’-er whip out their phone to Instagram. (guilty!)

Finally, if you only have a short time in Bologna and you want to see the main sights, your absolute first port of call has to be the Sanctuary. It lies high above the city and you can see the most spectacular views from it whilst also visiting a beautiful church. I’m not an adherent to religion or anything spiritualistic but even I couldn’t deny the peaceful aura in the sanctuary. It is also seeped in history as the sanctuary is connected to the city walls by the world’s longest portico, held up by six hundred and sixty-six arches. It’s a long and arduous walk up along the portico which you can still walk today or,(I love when there is an ‘or’ in this situation), you can pay 10euro to experience the train ride. There is no other way to describe this terribly quaint train other than a life size model of a kids train toy set. I should also warn you that considering it is being operated by Italians I wouldn’t count on it being an entirely smooth or danger free journey. Cause… 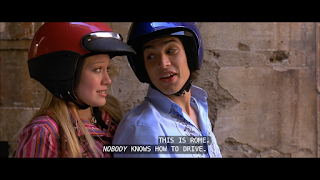 Please read ‘Italy’ where it says Rome. This sentiment applies to the whole country, not just it’s capital.

Just to make it clear this is the only way you should get to the sanctuary, if only for the meme of it all. 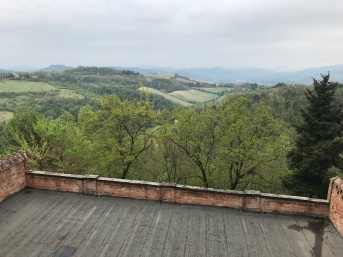 *sighs contently at the view* 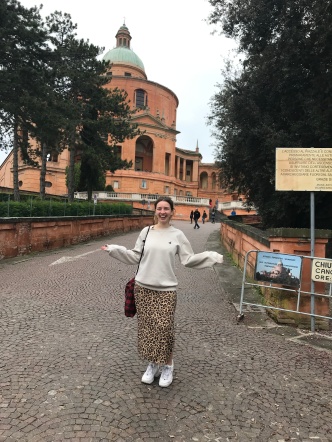 “Hey MTV welcome to my sanctuary!”

If you want to know more about this identity crisis of a city and don’t feel I have quite delved deep enough into it (which I totally haven’t so I take no offense) check out this video I’ve made by clicking here.

22.11.19- 24.11.19 ‘Tis the season to be looking forward to all things seasonally appropriate, such as but not limited to: Christmas lights, Glüwein, christmas carols, Michael Bublé coming out of […]
Regensburg

7.7.19-9.7.19 Italy is full of incredible places and scenery to explore. From it’s sandy beaches on its coasts to its natural springs and thermal baths dotted around tuscany and beyond, […]
Lago di Como

6.7.19-7.7.19 So this was not my first trip up to the capital of Italy’s industrial region. I have been up to Milan once earlier this year around October and a […]
Milano

Hi Kids,  If you are looking for a perch in the Piazza del Campo head to Key Largo. It is first and foremost a bar but also does really good […]
Coffee Stop: Key Largo

Hi Kids,  Another day, another restaurant in Siena that will, in the words of the that guys in mamma mia, tickle your tastebuds. Osteria del Gatto is one of the few tuscan […]
Food Stop: Osteria del Gatto

Hi Kids, If you are looking for an escape from Siena’s bustling and loud streets, then the place to go is the delightful bar called Blandis Cafe and Wine Bar […]
Coffee Stop: Blandis Cafe & Wine Bar

Hi Kids,  If you are in Siena and have a hankering for a really good burger and fries, (its a classic meal don’t @ me), then I would suggest Ristoburger […]
Food Stop: Ristoburger Easy
%d bloggers like this: